Ricky King Children’s Fund received a request for a 7-year old girl that has been diagnosed with Agenisis of the Corpus Collosum, Cornelia DeLange Syndrome, GERD/Esophageal Reflux, Unspecified epilepsy without mention of intractable epilepsy and Cellulitis and abscess of trunk. Alison has seizures throughout the night.The family and physician recommended the SleepSafe Bed so that she would be safe at night.

Medicaid and her insurance would not cover the bed. They would only cover a standard hospital bed. She was sleeping in a hospital bed, prior to our help. Alison’s mother wrote the following:

“Alison has seizures at night and becomes stuck in the railings. This bed for Allie would provide her a safe place to sleep. Right now, we have two side rails on her bed. She has managed to totally wedge herself in between the mattress and the side rail, leaving sometimes horrible bruising, pulling out her feeding tube, or making the alarm on her feeding tube go off, all night. I have caught her a few times, caught so far down in between the mattress and side rail that her face was pressed against the mattress making if difficult for her to breathe. I am up and down all night checking on her, as I am terrified one of these nights she will get trapped and suffocate. We have put little pillows down there, but they don’t help much.”

The original request for the bed was for $5,099. We were able to find a used bed with a new mattress of the same model for $2,497. The family was very helpful in the efforts to find a less expensive option. Below is letter from her mother and a picture of her in her old bed and in her new SleepSafe Bed.

“My little girl sleeping safely in her new bed last night! I cannot tell you how long it’s been since I’ve been able to put her to bed at night, and not worry about her suffocating herself. Words could not begin to express the gratitude! ! And go figure, she actually slept all night, not something that she has done much of recently!” 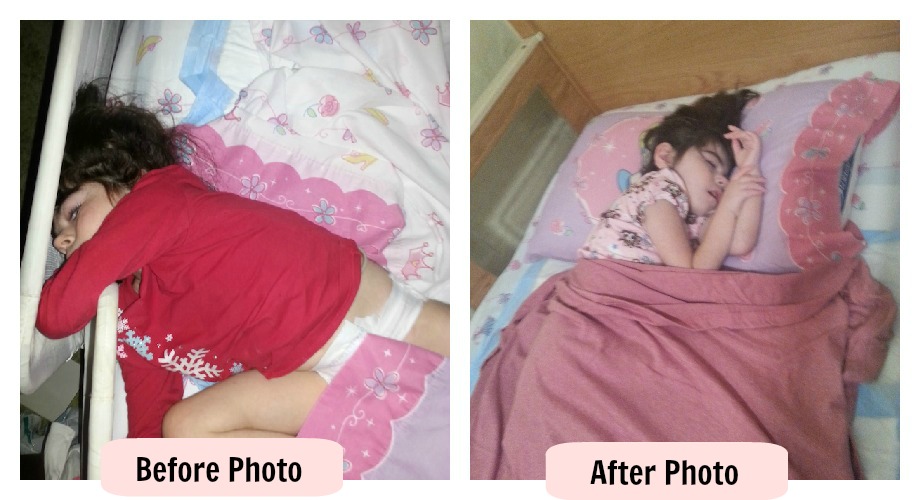