Florida Bankers Association Awards $5,000 to Uriel as Winner of ‘Bank On My Dreams’ Contest 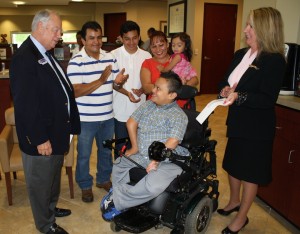 The Florida Bankers Association announced the 10 winners of its Bank On My Dreams contest. In April of this year, nonprofit organizations were invited to nominate individuals to win one of ten $5,000 prizes to make their dreams into
reality.

The Ricky King Children’s Fund nominated Uriel. Thanks to your votes, Uriel was selected! Uriel’s winnings will go towards improving the family’s current transportation by making improvements to their van and ramp.

“Thank you to the Ricky King Children’s Fund for supporting me. I loved the feeling of receiving the check. Then, the wonderful Mr. Tice announced that he was going to match the $5,000. At that moment, I was surprised and shocked that he would do such a great thing like that. Everyone started cheering and applauding. I am extremely grateful that Mr. Tice would help me repair my van to almost new by matching the check. Thank you so much,” said Uriel.